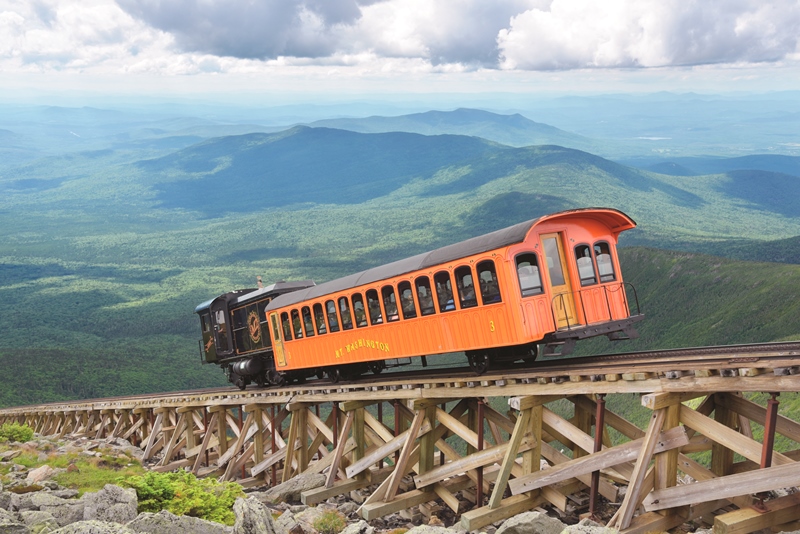 The Mount Washington Cog Railway is the first mountain–climbing cog railway in the world. (Philbrick Photography)

The Mount Washington Cog Railway, the first mountain–climbing cog railway in the world and the only cog railway still in operation in the United States, is celebrating 150 years of business in 2019. The Cog is located in the White Mountains of New Hampshire, 6 miles from the grand Mount Washington Hotel.

The Cog has remained an icon of New Hampshire’s heritage and has maintained its historic roots by allowing passengers to take the three-hour round-trip riding in a historically inspired coach powered by a 1912 vintage coal-fired steam locomotive or one of the modern biodiesel engines, all built on-site. Designated as a National Historic Engineering Landmark in 1976, The Cog was referred to as “one of the greatest wonders of all time” by the Boston Transcript at its inauguration in 1868.

The Mount Washington Cog Railway is a must-do New England adventure with a mountain experience like no other. Passengers travel in the vintage styled coaches to the summit of the peak known for having the world’s worst weather, but on a clear day views extend from the Atlantic Ocean into Canada as the train reaches the summit. Along the way, knowledgeable brakemen provide colorful commentary on everything from flora and fauna to the weather extremes of the mountain.

Once at the top, visitors will find Mount Washington State Park and the Sherman Adams Visitors Center. The mountain-top facility houses a winter weather exhibit, cafeteria, gift shop  and restrooms. There is an hour to visit the 1853 Tip Top House (the original hikers hotel, set as it was in 1853), enjoy a snack, explore the state park building and take in the magnificent views from the rocky summit.

Back at the mountain base, the new Cog Railway Museum, located in the upper level, tells visitors the fascinating story of how the historic railway came to be and offers media presentations and interactive exhibits on everything from operating a train in the engineer simulator to a 10-minute clip of the Emmy award-winning documentary “Climbing to the Clouds.” Downstairs, visitors can peruse the gift shop full of local and custom items to find that perfect Cog gift or White Mountain souvenir.

The anniversary season kicks off with a celebration of epic proportions on June 22. The 150th Anniversary Gala event has limited availability. On July 3 — the Cog’s official birthday, — the railway will be celebrating in style including presentations, games and fireworks. The railway’s long and unique history will be commemorated Aug. 17-18 at the fourth annual “Railway to the Moon” Steampunk Festival, featuring a lively mix of science fiction, Victorian style, technology and steam.

Headquartered in a historic station built in 1874 in North Conway, N.H., the Conway Scenic Railroad offers a variety of trips of varying length and duration, May through December.

The  Conway Valley Train runs 11 miles total and takes just under an hour, traveling south past North and South Moat mountains and crossing the scenic Saco and Swift rivers. The Bartlett Valley goes north and provides equally picturesque vistas of fields, woods and river crossings. The Notch Train travels north through Bartlett into Crawford Notch with a stop at Crawford Station before continuing on to Fabyan Station.eadquartered in a historic station built in 1874 in North Conway, N.H., the Conway Scenic Railroad offers a variety of trips of varying length and duration, May through December.

The Notch Train experience is unlike any other in New England. As the train begins to gain altitude, it breaks out of the woods into the spacious opening of Crawford Notch. The train makes several river crossings — East Branch of the Saco, Ellis River, Sawyer River — over well-maintained trestles.The famed Frankenstein Trestle crosses a mountain ravine high on a sheer rock face that looks down miles into the Notch and the Mount Washington Vally in the distance.

Conway Scenic Railroad has a variety of events planned for this summer. Murder Mystery Dinner Trains are set for June 8 and June 14. On June 16, a Father’s Day Special allows dads to enjoy complimentary coffee and doughnuts in Conway and there will be fun for the whole family with a vintage vehicles display, spiking demonstrations and barrel and motorcar rides.

On June 29, there will be a special train to White Mountains Regional Airport in Whitefield for “Airport Days & Fly-In.” This two-hour stop includes classic cars, tour of a Black Hawk helicopter, stunt pilots and more. On July 4, the Firecracker Express takes riders to Schouler Park in North Conway Village for festivities and fireworks.

Christmas In July is set for July 25, the Circus Train runs July 19-21 and Railfans’ Weekend is Aug. 31-Sept. 1, with special demos, freight cars, cabooses and other trains.

Owned by the same company that runs the White River line, the Green Mountain Flyer boards at Bellows Falls Station and runs 2½ hours for 26 miles on tracks that run to Montreal for the Central Vermont company. Through deep woods with spacious views of the Green Mountain peaks, this train crosses the Williams River, over the Brockway Mills Gorge and along several more wooden and steel bridges. Passengers share this ride with freight loads of salt, ice and lumber.

White River Junction in Vermont was, as its name suggests, one of the important railroad hubs in northern New England, and the White River Flyer offers a 2½-hour tour of the region, a 26-mile run mainly along the Connecticut River. The Boston & Maine RR and Connecticut Lines share the rails with a regular Amtrak run. From the Flyer, you can see the Dartmouth crew team out practicing near its massive shoreline rock with its green ‘D’ symbol painted on (which during the Harvard-Yale showdown one year, Harvard students painted crimson overnight before the race.) At Cedar Circle organic farm in the town of Thetford, the train has a half-hour stop where riders can explore and buy fresh produce and bakery items before the train pushes on to a quick stop at the Montshire Museum of Science. You can even skip a portion of the ride to peruse the museum in Norwich.

Daily through the summer, a single set of tracks takes all kinds of goods and services down to one of the country’s storied summer playgrounds, and also daily that same line brings back several carloads of trash to be dumped off Cape — sort of like an F. Scott Fitzgerald story. Well, between the working life of this railroad, there is a two-hour, 50-mile excursion ride and a dinner train that connects the “mainland” of the South Coast to Hyannis, the virtual Capital of Cape Cod. The train runs across the century-old Corps of Engineers dropping RR Bridge and plunges into the land Patti Page once sang about in “Old Cape Cod” — beaches, sand dunes dotted with beach plum roses, cranberry bogs and roadside vegetable stands. It’s classic Cape Cod without the auto traffic.

The lower stretch of New England’s longest river — the 400-mile Connecticut with its rise on the Canadian border — was once a thoroughfare in the days before the Industrial Revolution, when this region was the heart of Colonial America. One of the strong echoes of this era is found in one of the only steam train/riverboat ride combinations left in the world. The 1920s-era coaches behind the steam locomotive of the Valley Railroad line lead to Deep River Landing, where riders disembark and get aboard the riverboat Becky Thatcher (yes, Mark Twain lived in Connecticut) and plies out onto the river. The combination of fixed features — Gillette Castle, the Goodspeed Opera House, Haddam Swing Bridge — and the proliferation of wildfowl keep the cameras going. The whole 2½-hour ride covers 12 miles and runs to the end of October. Reservations are a must.

This is a two-hour run of about 20 miles, but the point is fine dining. It leaves the village of Woodstock, N.H., and follows the former Boston-Maine track along the Pemigewasset River, through the famed Jack-O-Lantern Resort as you enjoy an elegant five-course meal.
At night floodlights illuminate the view, and for a full view of the surroundings on this trip, there is a 24-seat observation dome on the top level of the 1952 Pullman Planetarium car, once built for the Missouri-Pacific Railroad at the very height of luxury train travel in the United States. This trip runs through the summer and fall, nearly to Halloween.

In lower Rhode Island, experience Newport, the one-time home of famous mansions and the America’s Cup, from a unique perspective. The Old Colony and Newport offers an 80-minute ride along the region’s fabled shorelines, where you’re liable to see the early American and colonial homes along Narragansett Bay, past the Newport Naval Station with its ship, the now decommissioned naval frigate USS Saratoga. On occasion, the train will travel an extra eight miles on the North End line.

Now Edaville Family Park in Carver, Mass., this is one of the oldest heritage train rides in the country, dating to 1947.
A narrow-gauge track (about two feet wide) leaves the theme park for a loop around the working cranberry plantation, stretching through woods decorated with various themes — jack-o-lanterns in October, Christmas lights in December. There’s now a section called Dino Land (needs no explanation), and a section dedicated to Thomas the Tank Engine and some of his friends on the Island of Sodor. This is definitely an option when the little kids get their summer crankiness on. With accessibility and amenities, ski resorts are terrific options for family-friendly hikes during the warmer months. Sugarloaf is one of four 4,000 foot peaks in…
Read More