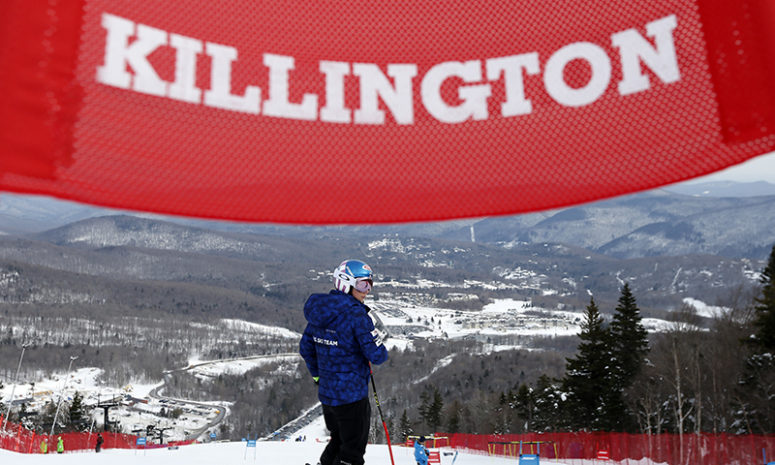 A little more than three weeks remain until the Killington Cup, the World Cup’s annual stop in Vermont, is scheduled to take place. Yet, a quick glance at the Superstar trail cam shows nary a sliver of snow on the competition trail.

“I’ve been trying not to stress about it,” Killington president and general manager Mike Solimaro said on an upcoming episode of New England Ski Journal’s Basecamp podcast. “We’ve had some warm years before and we’ve always been able to pull it off.”

The record November high in Killington is 65 degrees, a mark the Vermont resort could actually break this weekend, when temperatures, according to the National Weather Service, are predicted to hit upwards of 67 degrees.

The NWS predicts Saturday night’s low to be around 59 degrees.

In other words, it’s not exactly the best weather for making snow. With the top women skiers in the world scheduled to arrive at the end of the month, it has Killington personnel hoping for a chill that sticks around long enough so its snowmakers can fill the Superstar course, a job that doesn’t happen overnight.

“Generally, about five days of real snowmaking temps is probably the bare minimum,” Solimaro said. “We usually try to put five, seven, 10 feet of snow on that trail and pack it down. So we really want to pound it pretty hard.”

When Killington began blowing snow in early October, it seemed to be getting a head start on the work that needs to be done. But warm temperatures have halted all immediate goals that any ski areas have had about opening in early November. For instance, what are the odds that Mount Snow hits its projected opening date, only nine days away?

Cancellation isn’t a word that people at Killington want to hear, but it is one that raises as a possibility the longer the warm spell continues. The women on the World Cup circuit have yet to race this season due to lack of snow in Europe over the last month.

This would be the first time Killington is unable to receive a mid-month positive snow control from the Internal Ski Federation. The event has only been cancelled due to the pandemic in 2020, and weather (heavy snow and wind) last year, which forced the cancellation of Saturday’s grand slalom race.

There’s still plenty of time to avoid that. If only the forecast would cooperate.

The warmer days at Killington have allowed for work to continue on the new K-1 lodge, scheduled to open during the World Cup later this month.

“I’m trying to look at the positive,” Solimaro said. “We’re trying to finish the K-1 lodge and they’re pouring concrete [this week] on the patio. So, that’s a positive, right? If it was really cold, we’d be struggling with that.”

Overnight temperatures into next weekend at Killington (Nov. 11-13) are predicted to dip to lows in the 20’s. Last year, FIS gave a positive snow control on Nov. 16.

Until then, Killington awaits the inevitable Vermont chill to arrive at its doorstep and hopes that it is still able to welcome the thousands of racing fans who descend upon the resort each Thanksgiving weekend.

“I don’t think any of us thought it would be as big as it really is,” Solimaro said. “I think there was a lot of debate the first year. Some of these races get 500 or 1,000 people. We probably thought a success would be five, six, 700 people. There’s a downside to early-season skiing, but think of the upside

I know what you’re thinking. It’s early in the season — very early.  You’re the only person in your circle who is even considering going…
Read More Loon Mountain Resort announced Monday that it plans to add more than 30 acres of skiable terrain to the ski area’s South Peak area, an…
Read More