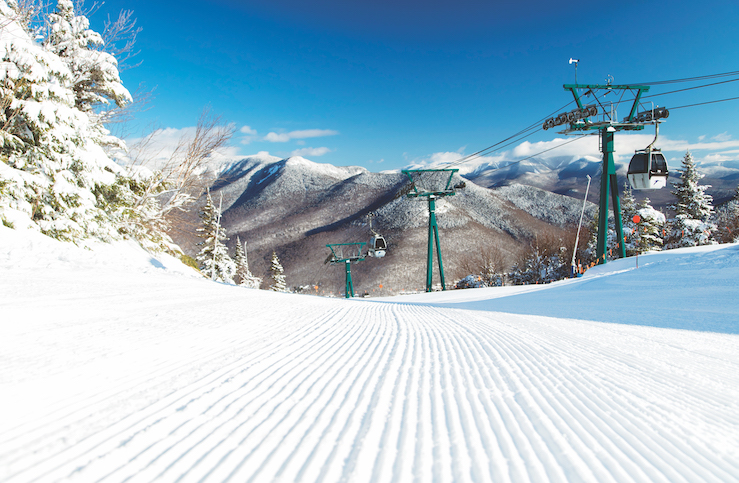 Don’t underestimate the impact that Loon Mountain’s recently announced South Peak expansion will have on the New Hampshire resort.

Under the scope of some other ski area developments throughout New England, Loon’s 30-acre expansion might not seem like much. There will be some new beginner terrain along with a new quad chairlift. But that “small portal,” as Loon vice president of marketing Kevin Bell described it, dramatically will help improve the mountain’s accessibility.

“When you look at expansion, it’s modest,” Bell said. “But it’s going to have a major impact on the experience for the guests. And for the town.”

That’s because the new Doppelmayr Alpenstar 4-CLF chairlift with loading conveyor is a game-changer. The lift, scheduled to open in time for the 2023-24 skiing and riding season, will be installed at the bottom of the current Escape Route trail. Guests will be transported up 500 vertical feet to access Cruiser and other terrain via the Lincoln Express Quad. It also will make Loon, already one of the most accessible resorts in the Northeast, even more so. The new lift will be located only 1 1/2 miles from Exit 32 off Route 93. As it stands now, the entrance to Loon is located three miles from the exit.

“Adding lift service just a mile-and-a-half from Interstate 93, in the center of Lincoln, improves the guest experience immensely and is something we’ve been focused on for many years,” Brian Norton, Loon’s president and general manager, said.

Connecting the community has been a major focus of Loon’s Flight Path: 2030, the resort’s 10-year improvement plan that launched almost three years ago. As part of the plan, Loon unveiled the Kancamagus Eight chairlift last season. The eight-person lift is billed as North America’s most technologically advanced chairlift (complete with ergonomically shaped, heated seats) and transports 3,500 skiers per hour to the top of some of Loon’s most-popular terrain. But connecting the community has been one of the four pillars of the plan (elevating the skiing experience, excelling in every season, and growing responsibly are the other three) since the beginning.

“We are on this flight together,” the plan reads. “Loon endeavors to help facilitate the opportunity for Lincoln and Woodstock to become the most-engaging mountain community in New England. Key investments will be made to expand resort activities to allow for increased access at all major portals. Loon’s team members will remain active in the community to promote and protect its values.”

Loon worked closely with the U.S. Forest Service and South Peak Resort LLC (a four-season home-owner community with slopeside trails onto Loon) to finalize and announce the plans. Approvals to proceed also were granted by the Town of Lincoln and New Hampshire Department of Environmental Services. That might sound like news worthy of a footnote, but it’s an important distinction when it comes to South Peak development at Loon. According to New England Ski History.com, planning for South Peak started in 1983. However, construction was long delayed due to environmental concerns. In 1993, the U.S. Forest Service approved expansion plans and trails were first cut in 1996. That same year, the U.S. Court of Appeals for the First Circuit halted the expansion, citing a possible U.S. Forest Service violation of the National Environmental Policy Act. Various court decisions and lawsuits followed over the years before Loon finally was able to proceed.

“The South Peak expansion has been a key part of Loon’s master plan for decades and we are thrilled to be moving toward the next major milestone of Flight Path: 2030,” Jay Scambio, COO of owner Boyne Resorts, said.

South Peak’s expanded terrain will feature new trails and tree-skiing areas designated as a mix of green circles and blue squares. The addition will increase Loon’s green-level terrain by more than 50 percent and boost the resort to more than 400 skiable acres. “The topography here is ideal for learning to ski or snowboard,” Norton said. “The most-advanced and energy-efficient snowmaking technology will be in place to service the new trails, including fully automated fan guns and frost-free pipes.”

The new lift also will immediately connect the Escape Route parking lot to the rest of the resort’s parking areas. The Escape Route lots, marooned at the far end of the resort, currently are serviced by shuttles that transport guests to the lodge of your choice. There is no lift or lodge access from these lots. Until next season.

“I can tell you, from someone like myself who stands on the bridge and tells people to turn around and park at South Peak, it is going to be a game-changer for us,” Bell said. “One of the challenges that we have right now is some people just don’t understand that we have a shuttle service to the Escape Route, and that’s not a great experience. We are trying to improve that.”

Along with the new lift and trails, Bell said essential services like ticketing and restrooms will be available for next season at South Peak. A new learning area, two surface lifts and a suite of facilities tailored around the learn to ski and snowboard experience also are being planned. The current Undercut trail will see additional tree clearing to allow for more access to the new South Peak terrain.

“But moving forward, we expect that area, this lift and that terrain to be our learning center,” Bell said. “So, we have a vision and plans to develop another rental shop and service lessons there. That terrain is perfect for all of that and one thing that we lack here at the resort is adequate learning terrain. When we finally get that terrain done, we’ll move into the full suite of services that would follow.”

Other projects on the 2030 timeline scheduled to begin before 2025 include a reimagined West Basin area, North Peak trail expansion and a new summer attraction. Late-stage projects (2025-30) include a relocation of the snow-tubing area, a Westward trail expansion, gondola upgrade, and the implementation of fully automated snowmaking technology. Sometimes, it can be easy to forget about a place’s rich history. Even in a place like Lake Placid.  “With the World University games coming,…
Read More Boston College ski team has reason to shine this season

In 2018, the Boston College ski team qualified its first athlete in program history for NCAA nationals. Things have progressed quite a bit since. Over…
Read More
Advertisement