As I quite literally owe my very existence to Magic Mountain, news about its operational peaks and valleys over the decades always has caught my eye.

It is here in the Magic cosmos, dating back to 1960, where my parents were first united; my dad was one of the Swiss instructors brought in by founder and developer Hans Thorner to teach skiing, while my mom worked in the ski area’s front office.

What Thorner discovered in the picturesque Glebe Mountain landscape of Londonderry, Vt., served as the ideal canvas to craft and replicate an authentic Switzerland mountain experience, from classic trails cut into steep and challenging terrain to its vibrant village nightlife. Magic thrived in those early decades under Thorner’s guidance. But after he sold his creation in 1985, the southern Vermont ski area tumbled into an era of inconsistency. This included a period of closure in the 1990s when critical bits and pieces of resort infrastructure were broken up and sold off.

Today, the resort has undergone a complete rejuvenation thanks to historic improvements in snowmaking, grooming, terrain and lift service. These ambitious projects are fulfilling the vision of Ski Magic LLC, the investment group that took over ownership just before the 2016-17 season. It already has had an impact. Since the emergence of Ski Magic, “the road less traveled” has seen a quadrupling of season pass sales and a doubling of skier visits.

“Ultimately, this has been about keeping the true passion Magic skiers have for the sport and the unique character of this mountain alive and well for those who went before us, those here now, and those who come after,” said Geoff Hatheway, Ski Magic’s founder and president. “Every investment we make, and all the hours our hardworking staff puts in, is about delivering Magic’s experience to more people who yearn for something different — a deeper connection to both the mountain and its people.”

The snowmaking system that Ski Magic inherited in 2016 covered about 25-30 percent of the trails, so one of ownership’s first investments was to install newer energy-efficient HKD guns to improve both quality of snow and energy efficiency. Diesel compressors were converted to electric, and state-of-the-art variable frequency drives were installed. Old pipes were repaired or replaced and pump motors on both of the area’s lines were upgraded to deliver more horsepower, allowing the system to run more guns now capable of providing snowmaking on 50 percent of the trails.

“We’ve brought back expert trails like Sorcerer last year, and this year, Witch and Black Line on the West Side,” Hatheway said. “But we’ve also made sure to include more intermediate and beginner terrain, so this year we are also adding two novice trails— Rabbit Run and Upper Little Dipper — plus Vertigo on the East Side to continue to help broaden Magic’s appeal to families of all abilities, not just experts.”

If all goes to plan, Magic’s new base-to-summit Black Line Quad will open in January. Installation of the fixed-grip Poma, which was acquired from Stratton Mountain Resort, had been wrought with delays due to the challenge of retrofitting the lift to the steeps and cliffs of Magic.

“The Poma quad allows us to more comfortably carry the huge increase we’ve seen in skier visits to Magic since 2016,” Hatheway said. “It allows us to minimize any lift lines to near-zero wait while we still maintain our daily lift ticket sales limit of 1,500 skiers. As it is a fixed-grip lift, it still maintains an even pacing of skiers out on the mountain to keep our trails less crowded and skiers more dispersed. We don’t want our experience to change as more people discover what Magic is all about.”

Built in 1971, Magic’s iconic Red Chair, which carries skiers 1,500 vertical feet to the summit, was slated for replacement two years from now, but inspections bumped the timeline to begin repairs earlier this year.

“It truly is a soulful lift,” Hatheway said. “But it is 50 years old and we need it to last another few decades.”

Delivery of two miles (18 tons) of custom-manufactured haul rope was delayed into November, and Pfister Mountain Services was working to install it, along with a new drive and shaft, hopefully in time to have the lift running for opening day on Dec. 18.

When Magic reopened in 1997, its beginner area lift and mid-mountain lifts both had been sold off. The only option for beginners and novices — other than a handle tow in the base area — was to go to the summit.

“So we installed a new 170-foot conveyor lift in the old beginner area, which hadn’t been used for decades, and made snow there for learn-to-ski and ride lessons,” Hatheway said. “Then we finished building the mid-mountain (Green Double) to ‘Sunshine Corner,’ which is a beautiful microcosm of Magic with a mix of easier and advanced terrain, including glades, with 825 feet of vertical drop.”

The final piece of the puzzle is being put into place this season with a 600-foot-long handle tow above the conveyor lift in the learning area, giving skiers and riders lift-served areas for progressive learning.

“One of our goals was to make Magic more family-friendly from a learn-to-ski and progression perspective,” Hatheway said. “And that’s why we are here, to assure long-term sustainability and viability for this great ski area for generations to come.”

Last season, Magic replaced its tubing park with a terrain park, which is located at the base with its own 600-foot handle tow lift.

“It’s the only terrain park in southern Vermont open after all other lifts are closed,” Hatheway said. “And all the nighttime action can be viewed from the Black Line Tavern in the base lodge.”

Because of COVID restrictions last season, the ski area moved more food and beverage options outside. These are changes that will remain.

“From the tent and takeout window in front of the lodge to the new T-bar and fire pit area at base of Show Off trail with beautiful views, there are just more spaces to hit the mountain, grab a bite or drink, and socialize outside,” Hatheway said.

While on the upswing again, the soulful roots of Magic never have disappeared.

“Besides the unbeatable terrain here, the reason I brought up my kids skiing here after Magic reopened in the late ’90s was that feeling of acceptance and being a part of an extended family,” Hatheway said. “Magic skiers and riders are just incredibly friendly, welcoming and non-judgmental. There’s a passion for the sport and shared camaraderie of it that feels more like the sport I grew up with. The pace and vibe is really laid back. You’ll meet someone new and different every day and share stories and experiences about skiing. Not necessarily about what you do for a living or what car you drive. And we keep our passes and tickets as low as possible so people can afford to come here from all backgrounds to share in this communal celebration of winter.” ′ 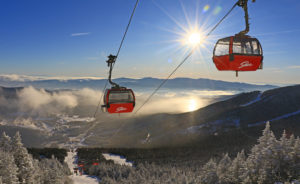 Scroll through some of the recent work from Vagrants, a Boston-based film production company, and you’ll find a number of commercial spots produced for the…
Read More
Advertisement