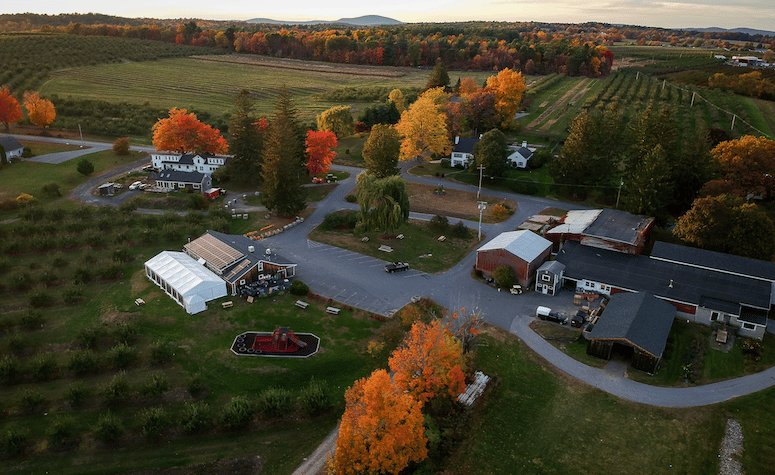 STERLING, Mass. — While it might say little about the farm itself, the front porch at Meadowbrook Orchards is immediately inviting to anyone who might already be in a winter state of mind.

Located only 14 miles from Wachusett Mountain ski area, it fits that the central Mass. orchard would welcome guests to its 100 acres of rolling farmland with a loveseat created out of vintage Atomic ARC and Völkl P30 skis.

Skiing is a passion for the Chandler family, which has owned Meadowbrook Orchards since 1912. David Chandler, who died in 2019, skied regularly and officiated ski races around New England for all of his children. And the orchard’s restaurant is the perfect, early-morning stop for skiers to make for a hearty breakfast en route to the Wachusett trails less than a half-hour away. General manager David Chandler has been a coach there for more than 15 years. His mother, Kathy, was the ski school director at Wachusett during the 70s and 80s. She also founded Waterville Valley’s Adaptive Snowsports Program in 1992 and has a trail named after her — Chandler’s Way — on Green Peak. In 2013, she was inducted into the Adaptive Sports Hall of Fame for being “one of the first PSIA adaptive and alpine certified examiners in the East,” and is also a member of the Massachusetts Special Olympics and the Waterville Valley Halls of Fame.

Five generations of Chandler family have worked at the farm since its inception. Visitors will find four varieties of apples (cortland, macintosh, macoun, and empire) to pick on their own through October, just as they might at several other orchards within the vicinity. But the bakery, restaurant, and farm store at Meadowbrook are the true stand-outs, utilizing the fresh produce on the farm to create a wonderful medley of baked goods, fresh sandwiches, and barbecue offerings. Just as attractive as the items are on the menu, wait until you see the prices.

Traditional breakfast options such as pancakes and eggs are joined with more unique creations on the breakfast menu. The apple cider donut French toast ($6.50) puts a unique spin on a fall favorite, while the macintosh omelette ($7.99), made with cinnamon apples, sausage, and cheese, is bursting with flavor that was provided just out the window of the restaurant.

A variety of sandwiches, soups, and salads are on the lunch menu. The Orchard ($9 full, $5 half) features ham, cheddar, fig spread, and apples from the orchard served on a pretzel bun. Diners can create their own sandwich from a variety of ingredients, or make it a soup-salad combo. In all, there aren’t many dishes on the entire menu that will cost you more than $10.

The bakery, within arm’s reach of the restaurant tables, features a tempting variety of cookies, pies, and breads. Traditional pies at Meadowbrook include banana, apple, coconut custard, and mincemeat pie, while sugar and gluten-free (from Annie’s Gluten Free Bakery in nearby Shirley) options are also available. Advanced orders are appreciated during the holidays, but most products can be ordered in the morning and picked up in the afternoon.

Linger in the farm store on the way out to pick up heat-and-serve dinners (chicken cordon bleu, stuffed shells, and Buffalo chicken Mac and cheese among the choices), frozen breads, pastries, and desserts. Meadowbrook’s own jams (blackberry, nectarine, and apple cider) and sauces (spaghetti, BBQ, cran-apple) are available for purchase, as well as local favorites from Boston Public Market, local farmers markets, and Maine’s Stonewall Kitchen. Through February, Meadowbrook will hand-pack extra-fancy apples and ship them priority mail to your desired location.

Through October, you’ll also find Meadowbrook Orchards at a pair of farmers markets in Sterling (1 Park St., Fridays 3-6:30 p.m.) and East Boston (intersection of Meridian, Bennington, and Border Streets, Wednesdays, 3-6:30 p.m.). Private parties can be held on the orchards grounds, where the restaurant and patio tent provide the perfect environment for weddings and outdoor parties. (Rental offerings from mid-September to mid-October are limited.) Meadowbrook will even make hosting your own party easier, with a catering menu that includes breakfast trays, dessert platters, lunch items, and barbecue.

When you’ve finally had your fill at Meadowbrook Orchards, the ski chair loveseat awaits as a reminder to guests that fall is fleeting. Winter is coming.

Meadowbrook remains a good place to visit at that time of year as well. Much in the same way that skiers feel a jolt of excitement when those early flakes start swirling around the mid-autumn air, that same switch…
Read More