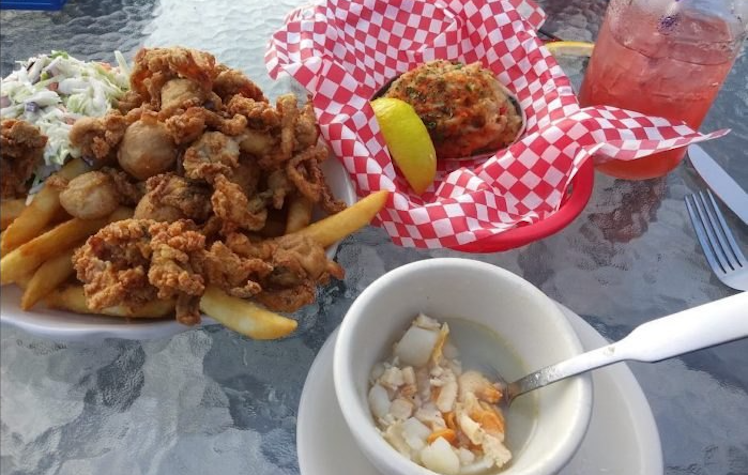 Evelyn’s Drive-In, located in Tiverton, R.I., is one of the top clam shacks in New England. (Evelyn's)

Fried clams, ice cream, and other refreshing treats. They are the mainstays of summer in New England, where culinary adventures can be as simple as taking the next exit on your road trip.

Here are six spots — one from each state — where you can find some of the best roadside eats this summer, no matter where the highway might lead you.

There are hundreds of clam shacks all along the coastline of New England, but this small outlet on the docks of Falmouth Harbor might be as authentic as they get. Jim’s Clam Shack is just that — a shack. It’s a no-frills seafood destination complete with weathered shingles and a screen door. Its simplicity is what breeds its popularity, though. What exactly do you have to dress up for when your calling card is serving dishes fresh from the water you call your backyard?

For years, Jim’s has been able to boast some of the freshest scallop rolls, whole-belly clams and lobster rolls on the Cape. But it doesn’t really receive the same sort of recognition that other shacks along the Cape might receive. That’s the reality when you’re tucked away in the harbor rather than sucking in the tourists along Route 6. But that also helps make Jim’s one-of-a-kind. Don’t expect a huge menu — Jim’s alters the offerings based on what’s best available — but do count on the mainstays of a clam shack in an environment that celebrates the industry. That boat making its way into the harbor just might have your next meal on it.

A “creemee” is a Vermont word for soft-serve ice cream, often flavored with maple. But in general, a creemee can be any flavor and is a popular summer treat that can be found throughout the state.

Vermonters and visitors alike will all preach for their own favorite roadside creemee stands, but Wilmington’s Creemee Stand has received accolades from the likes of the Food Network, which, in 2019, named Creemee Stand’s Vermont maple creemee the “best dessert in Vermont.” Edible Green Mountains Magazine also named it one of only four locations in the state of Vermont serving the “absolute best maple creemee.”

The maple creemee is one of a handful of soft-serve options (it’s more like a custard consistency) including chocolate, vanilla and a twist of Vermont maple and black raspberry. Hard scoops, banana splits and Italian ice also are available.

Bob’s is like an old faithful for Maine vacationers, a bucket-list clam shack that promises newcomers fine, fresh seafood, all while offering repeat visitors a sense of nostalgia. Whether your destination is Kittery or you’re just passing through en route to more Northeast adventures, a stop at this Maine clam shack is a tradition unlike others.

Bob’s has been serving meals “fast, crispy and fresh off the local docks” since 1956. It also has been featured on Fieri’s “Diners, Drive-Ins, and Dives,” and was named a “Great American Lobster Destination” by USA Today.  Coastal Living also recognized the lobster roll at Bob’s as one of the best in the state. Yankee Magazine spotlighted the clam hut as having one of “the 10 best fried clams in Maine.” Even Martha Stewart has been known to swing by for a bite.

In addition to lobster, oyster and tuna rolls, customers at Bob’s can explore local fare such as the Moxie barbecue tenders, prepared with the famed Maine soda. There are crab cakes, haddock and lobster chowder, a kids menu, and beer and wine.

Polly’s is the sort of institution you hear about for years with a note in the back of your mind that you’ll have to check it out someday. Do yourself a favor and make “someday” this summer.

What I discovered when I finally visited this Sugar Hill landmark only three years ago was that Polly’s easily has rocketed to the top of my favorite breakfast spots in all of New England. For 80 years now, Polly’s has been serving some of the most sought-after pancakes in the Granite State, made with a special mix created from scratch. Check the board for the daily pancake special (recent offerings have included pineapple and apple cinnamon pancakes) or select from the everyday menu, which boasts blueberries, walnuts and coconut as pancake add-ins. Batters include cornmeal, whole wheat and gingerbread.

There are more than just pancakes (sandwiches, eggs and waffles also are available) but the main item is reason enough to make the stop. During the summer months, Polly’s can get packed, so get their early or prepare for a wait. It’s worth it. Easily.

In New England roadside lore, there are clam shacks, ice cream spots, and, of course, hot dog huts, where travelers can pick up a quick road bite before continuing on to their destinations. Fairfield’s Super Duper Weenie, located right off exit 25 on I-95, serves up a variety of specialty hot dogs, including the New Englander (sauerkraut, mustard and bacon), the Dixie (topped with homemade chili and coleslaw), and the Georgia Red Hot (spicy Southern sausage with sauerkraut and homemade relish).

The fries at the Super Duper (sourced from thousands of pounds of potatoes from western Mass.) are hailed as some of the best in the state. The spot has appeared on PBS’ “A Hot Dog Program,” Food Network and “Late Night with David Letterman.” Super Duper has catered for the likes of Martha Stewart Living, Sandra Lee and Fieri.

This clam shack is prominently featured along the side of Tiverton’s Main Road. But Evelyn’s has long been defined not only by the delectable seafood options it provides, but its dock in the rear, welcoming boaters to the shore with the promise of a New England favorite.

I’ll say this now; thanks for playing to everyone else and all, but Evelyn’s has the best clam cakes in the state. Indeed, if there are a host of images that defined my childhood, they might include my room, my first day at school, and those grease-stained paper bags that had a baker’s dozen of crispy clam cakes, filled with piping hot dough. There aren’t too many trips to Evelyn’s that I can recall when I had anything but. It was Evelyn’s lobster chow mein though that got the shack recognized on Guy Fieri’s popular “Diners, Drive-Ins, and Dives” on TV’s Food Network. Fresh lobster is set atop Fall River-style crispy noodles, a local favorite that is also an ingredient in the regional delight of a chow mein sandwich.

The sunsets at Nannaquaket Pond have always been spectacular as well. Pair them with the perfect clam cake and you’ve got the ingredients for a memorable summer evening. Polar Caves celebrating 100 years of exploring in the White Mountains

The Polar Caves might be celebrating its 100th anniversary this summer, but let’s face it, that’s kind of like observing your 28th birthday into perpetuity. …
Read More