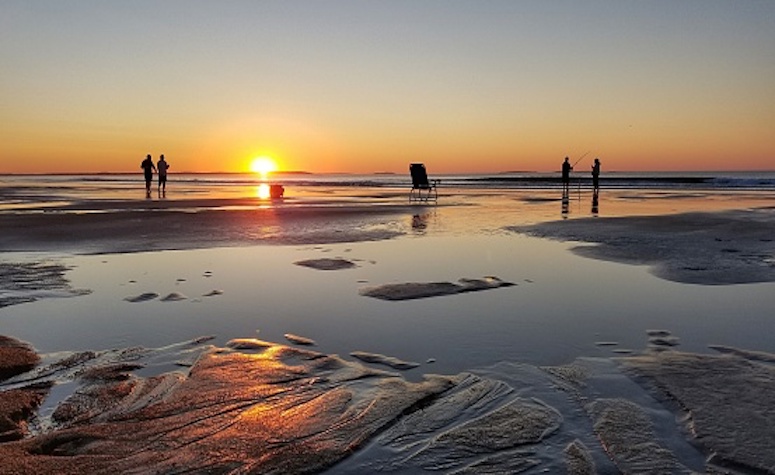 Nothing says, “summer” like a trip to the beach. Luckily, New England has a plethora to choose from.

Here are six of our favorite beaches — one from each state — to enjoy this season.

The year-round population of 9,000 residents in the town of Old Orchard Beach swells to about 75,000 during the summer. That is testament to the region’s vibrant family appeal, the centerpiece being the seven-mile stretch of Old Orchard Beach itself. Home to one of the last remaining oceanfront amusement parks in the country, Playland, the beach’s center also features the Old Orchard Beach Pier that extends 500 feet into the Atlantic. The Pier features many seafood shacks and restaurants and transforms into a hotspot for nightlife with live entertainment. — oldorchardbeachmaine.com

Weirs is the most popular beach in New Hampshire’s Lakes Region. Situated on the shores of Lake Winnipesaukee, Weirs boasts many attractions including numerous arcades, bumper cars and the iconic Weirs Beach Drive-In Theater. The wooden boardwalk stretches along the water, parallel to train tracks that are still used by the Winnipesaukee Scenic Railroad. The area offers lake tours and themed events like family nights, dance cruises and fireworks viewing. It also hosts Motorcycle Week each year around Father’s Day. — weirsbeach.com

Also known as Carousel Beach, this quaint coastal destination is positioned next to the antique carousel in the village center, the oldest continuously operating merry-go-round in the country. The beach is located on a peninsula that juts out into Block Island Sound. Watch Hill is home to several popular restaurants and boutiques. — merrygoroundbeach.com

Despite being a land-locked state, Vermont, with more than 800 lakes, has a large number of sandy beaches. North Beach, located on Lake Champlain next to the Burlington Pike Path, is among the most popular. The large sandy beach features a grassy picnic area with grills and picnic tables, a full-service snack bar, restrooms and foot showers. The adjacent campground has dozens of tent and RV sites. It is fully electric and has water hook-ups. enjoyburlington.com/place/north-beach

Positioned about 30 miles northeast of Boston, and immediately north of Cape Ann, Ipswich’s Crane Beach attracts more than 350,000 people annually to its shores. Revered not only for its four miles of white, sandy Atlantic beachfront and dunes, Crane’s 1,200 acres also are home to a diverse wildlife habitat and the North Shore’s largest coastal pitch pine forest at Castle Neck.

Visitors can safely access Crane’s pristine features via more than five miles of hiking trails traversing through the habitat. The dunes are protected by elevated boardwalks and fencing, while fencing also protects sensitive wildlife, including the nesting sites of the threatened piping plovers. An unwanted resident — at least as beachgoers are concerned — are the green-eyed horse flies known as greenheads, which typically make their appearance mid-July through August.

With views out to Ipswich Bay and a not-too-distant Plum Island, beachgoers at low tide can wade out to the exposed sand bars, where boats also frequently drop anchor. — thetrustees.org/place/crane-beach-on-the-crane-estate Getting around New England — 6 unique ways to travel the region

Ditch the car this summer and discover a more exciting way to travel. Here are six of the most unique — one from each state…
Read More While most ski resorts announce offseason capital improvements around this time every year, guests aren’t likely to appreciate any of the work that’s being done…
Read More