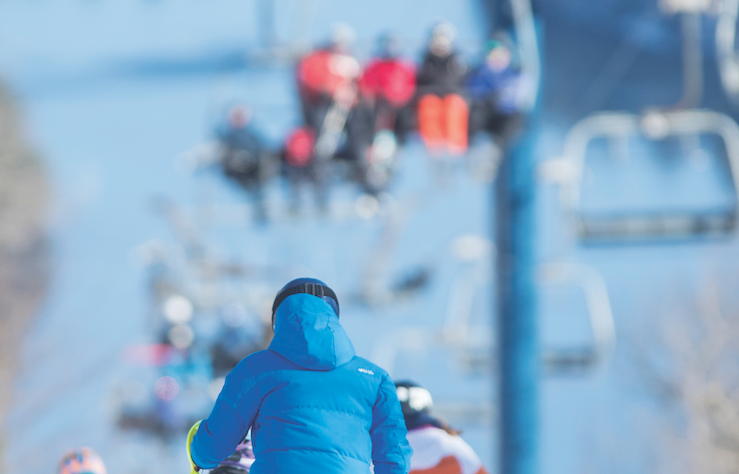 The skiing gem of central Massachusetts, Wachusett Mountain has built an image that has lasted decades.

With a never-ending emphasis on providing a quality product, the Crowley family has managed to keep reinvesting in the mountain, delivering a ski area that might be among the most profitable in all America. That’s a factor that can be attributed to its friendly, 65-mile distance from metro Boston. But it also speaks to the quality of the product that skiers and riders keep coming back.

We caught up with Wachusett Mountain president Jeff Crowley, who discussed ownership’s decision to limit season passes this year, the inherent need to keep improving the mountain, and what the future might hold for the beloved ski area.

New England Ski Journal: How did it feel to be ranked ahead of resorts like Stowe and Mount Snow in Ski Magazine’s annual roundup of the best Eastern ski areas?

Jeff Crowley: Obviously, that is quite an honor to be there. We sure as hell did luck out. Those are two amazing resorts. We’re just honored to be in the same article as those guys.

NESJ: Wachusett decided to put a limit on season pass sales this year, ultimately selling out. How did that decision come about?

Crowley: That worked out well. We were just wondering whether or not we would be out of the whole COVID thing. Our concern is that there are more and more people working from home and it is harder to gauge usage compared to previous years. With more people working from home, they can just come up here more often. We just want to make sure that we don’t overcrowd the area with too many guests. By limiting the pass sales, we can control the number of folks that come on any given day.

Crowley: You never know. It seems like this (COVID) is going to be around for a while. If everything remains the same, I think that this is probably the avenue that we’ll be pursuing.

NESJ: One season removed from the height (we hope) of the pandemic, what did the ski area learn about running the business from a safety perspective?

Crowley: Fortunately, as you know, it’s a great place to be in regard to a COVID activity. Ninety percent of it is outside. There were some people that I talked to that never even set foot in the building. They would just use the port-a-johns, they could buy their ticket at the ticket booth or just go direct-to-lift, or they could buy food at the food truck. We’ve got the outside setup at O’Brien’s and it really is a pleasant experience. I think, in some respects, it has kind of brought us back to the old days, the roots of skiing. There’s a lot of outdoor activity. We have all those fireplaces, the wood-burning stoves, LP gas burners, and the benches that we have like the (New England) Patriots would sit on. It’s an amazing experience. I think, if anything, we’ve just made some lemonade out of some lemons.

NESJ: Has Wachusett ever entertained the idea of again joining a multi-pass? What would be the advantages and disadvantages of doing such?

Crowley: We did participate in the Max Pass years ago, and we were one of the busier locations for them. I think it was very valuable in that it introduced a lot of people from the Boston area who had never been to Wachusett and only knew our TV ads. I like to think that they were pleasantly surprised with the experience that they had here. Obviously, I’ve got a ton of respect for all those people, but it is also nice to be kind of in control of your own destiny. And you never know, with the multitude of passes that are out there all of a sudden, now there are too many skiers coming in. It’s nice to control your own destiny, you know what I mean?

NESJ: Location always has been Wachusett’s most popular attribute, but ownership never has rested on that luxury, continually improving the ski area. Has there ever been temptation to stay status quo since the people will be coming anyway?

Crowley: It’s just not in our nature. I’ve got a file of ideas for next year. We really do subscribe to the content of continuous improvement and just making it better. We’re passionate about the sport and about making the experience better. The last thing we want to do is sit on our laurels. In a perfect world, if the state and other non-profits were more open to it, we would have more terrain open because we could use that. But they don’t really seem to think it makes a lot of sense. Obviously, they are entitled to their opinion and I respect that.

NESJ: Wachusett has been called one of the most important ski areas in America because of its close proximity to major urban areas, giving the sport a large market to grow in. Do you feel a sort of responsibility in your ownership of a site that is so important to the future of the sports?

Crowley: That’s a nice compliment. I think we do have an obligation to make sure that folks have a positive experience and that they really want to stay with the sport. I think that, once again, it comes back to us being passionate about it. We just want everybody to feel that way. It is a nice responsibility. We’re lucky that we’ve been blessed with this. You really have to go back to our father, who leased (the mountain) from the state back in 1969. It was his vision that said, ‘OK, if we could provide high-quality recreation, close to a metropolitan area, that would be ideal.’ It would be tough when he would try to take us up north and so forth. From a convenience standpoint, people have so much going on that sometimes it’s hard to dedicate that much time to go off. We’re lucky that we have this so close.

NESJ: What does a ski trip look like for the Crowley family? Is it all Wachusett, all the time, or do you manage to sample other ski areas in either the region or the country?

Crowley: For a while, one daughter was working out at Gorsuch in Aspen. That was a good one. That’s an amazing place. Ideally, I’d like to click off as many resorts out west. Some of my favorites are Sun Valley, Alta, I love Squaw. One of the things that really came out of those western trips is that we saw how amazing the snow was and how great the experience was. We thought, ‘How can we bring this quality skiing experience back to Massachusetts?’ And having gone out skiing today (at Wachusett), we did it.

NESJ: How much of an impact has the ski area’s recent snowmaking system upgrade (Wachusett committed more than $2 million to its X2 Snowmaking Project in 2016) managed to have on recent seasons?

Crowley: I have to give credit to the rest of the families. We have shareholder meetings and we would all be in agreement that it makes sense to be aggressive. We don’t want to sit on our hands and harvest the profits. We just want to continue to re-invest. It enabled us to get through this mild December. It was so warm it was ridiculous. But as soon as it got cold, we were able to hit it and get our trail counts right back. It’s just remarkable. We’re really proud of the system, and the guys who operate it really know what they’re doing. Even in a COVID year, they’re out there running shorthanded and doing amazing work.

NESJ: How challenging has it been trying to expand at the mountain, and are there any other further plans to try and create more terrain?

Crowley: Having gone through that battle, it was not fun. Unless there’s a revolution or a change in attitude in Boston. … But you do have to consider, we are in a state park and we have to get along with all the other groups that are using the area. We’re content with what we have. We’re lucky that we are able to ski here. In some respects, there are some places where you can’t even ski, so I guess we just have to count our blessings.

NESJ: What are some of the big-picture dreams you might have for Wachusett over the next 20 years or so?

Crowley: There’s always the thought of having some sort of lodging nearby. A lot of people come up to us and say, ‘We love the area, but would like to stay closer.’ So that’s one of the things that would make sense and we’d like to do it in such a way that was obviously tastefully done and in the spirit of the way everything looks here now. Then it’s just a matter of lift upgrades, taking care of the skier services building (the old ski school building is in need of a makeover). A lot of folks are asking for tubing. So, there’s just a lot of little things that make sense. We’ve been conditioned to think nothing of it; willfully grabbing a seat on a metal bench soon to be dangling dozens of feet in the…
Read More It has been a rough stretch for Vail.  Well, really, it’s been a difficult start to the ski season for everyone. A lack of natural…
Read More