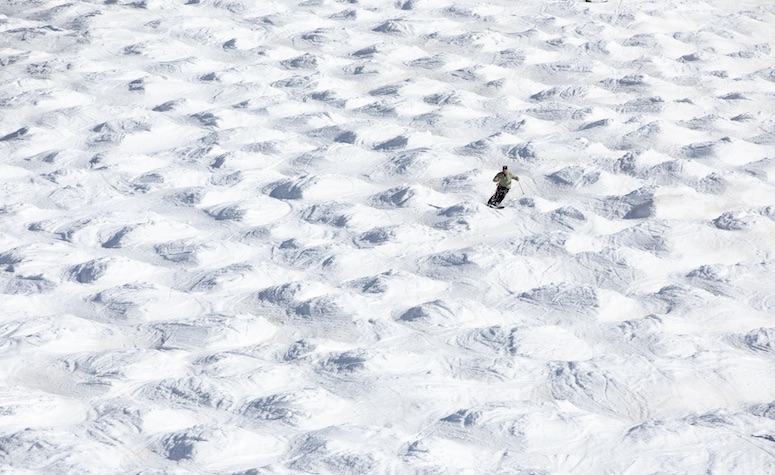 With all apologies to powder days worth salivating over, spring skiing is where it’s at.

Now, of course, you can’t have one thing without the other, so no disrespect to those midwinter storms of delight. But when I envision the perfect ski day, it involves a bright, bluebird sky with temperatures warm enough to ski in a T-shirt, with the smell of Banana Boat permeating throughout the air. Music is blaring at the base, and the vibe is comforting, reminding us to savor the final few weeks of our favorite activity.

Here are 10 of the best trails in New England to experience during the spring, when warm weather and sunny skies turn them into the best playgrounds spring skiing can deliver.

There’s a reason why the King of Spring is willing to strip down to little more than a Speedo and regal cape in Killington’s brilliant, annual springtime marketing blitz. For when it comes to New England’s best, most storied ski trail to seek out in the spring, there is Superstar and then there is everything else.

The snowmaking starts early on Superstar, a wide black diamond trail accessible via the Superstar Express chair lift, in order to get it ready for November’s stop on the World Cup circuit. It hardly stops as long as temperatures allow it throughout the winter. Come spring, it is a mogul madness that goes without grooming until the sun starts really setting on the season. At Killington, that might run into June.

But to suggest there’s a better spring scene than working your legs on bumps all day long, only to finally succumb to the tailgaters below, putting a cap on the day amidst the alluring scents of sunscreen and BBQ? Just trust the King.

The Front Four (Starr, Goat, National and Liftline) get all the attention, but Hayride always has been my favorite trail to seek out at Stowe during the spring. When there’s ungroomed terrain on the course, it creates a host of possibilities. The steep pitches create a timely thrust with which to navigate the bumps, and there’s a rhythmic quality on this trail that’s unique. That “dance with the mountain” that skiers often talk about? It happens more often than not on Hayride, and I’m never afraid of asking for a second dance.

Oh, and if you’re lucky enough to figure out the best places to dip into the woods along the way, you’re going to appreciate Stowe all the more.

Located in Sugarloaf’s famous snowfields, which boast the only lift-serviced, above-tree line skiing in New England, White Nitro is one of the chutes skiers and riders will encounter atop the top of the mountain. Once you get over the views stretching all the way to Canada, you’ll dive into a trail that Ski Magazine once noted has a “toe-curling fall line.” During the winter, the double black diamond can feature the sort of New England, icy firmness that can be tough to grip. But in the spring, when the sun shines and the warmth provides a softer experience, skiing or riding White Nitro can be worth bragging about.

I’ve always found the most comforting vibe at Sunday River to be at the White Cap Lodge, the spot where I try my best to begin each day of skiing at the Maine resort. There’s easy access here via the White Heat quad to what Sunday River bills as the “longest steepest widest lift-serviced trail in the East” (no commas) in White Heat. It’s Sunday River’s best answer for trying to create Maine’s own Superstar, but, for my liking, Obsession is the trail to seek out.

The trail has what Visit Maine once called an “action-packed blend of steeps and compressions” that winds its way down from the White Cap peak. Rated a single black diamond, it’s not as steep as White Heat next door, nor is it as challenging as the Chutzpah woods that border it. But like Hayride at Stowe, the trail gives enough pitch and pause to create a rhythm that feels like dancing with the mountain. Obsession is a treat worth getting infatuated over.

The Kennebago Steeps provide some of the most unique lift-served terrain in the East, and the fact that they’re finally open again is reason enough to make the trip to Rangeley. Now in the second season of its resurrection (Saddleback sat dormant for five years), the ski area has again become a coveted spring destination. Take your time to experience the Casablanca Glades, but save some leg muscles in order to check out Muleskinner, the winding black diamond that cradles the adjoining glades. Left ungroomed, Muleskinner is a mogul field that twists and turns its way through trees and pitches. It can be a challenge to decide where to focus — on the terrain in front of you or the majestic views of Rangeley Lake below. The Steeps gives other options — Black Beauty, Frostbite and Tight Line are tremendous — but Muleskinner is the one to brag about tackling when spring hits.

There’s a bit of a Superstar feel on True Grit. Like Superstar Express, the Killington chairlift that zips you up the trail so fast your legs barely have time to recover, the Sunnyside Triple delivers a bird’s-eye view of how skiers and riders are handling the bumps below.

The Sunnyside, erected in 1979, might not have the same sort of speed, but the goods it delivers you to are among the best during spring in the Granite State.

Olympian freestyle skier and Vermont native Hannah Kearney recently told Boston.com that True Grit is her favorite trail. That’s some high praise from a mogul skier who has 10 World Cup titles in addition to Olympic gold and bronze medals. The double black diamond, which could be considered Waterville’s signature trail, is steeply pitched with plenty of corn and mashed potatoes to serve up when the sun starts shining. Then there’s that special springtime vibe that comes with chairlift commentary (both the cheers and the jeers) from above. If you catch it all just right, you wind up in the sort of scene that makes spring skiing special.

Okemo wasn’t exactly known for its steep skiing. At least until Quantum Leap and Vortex came along. Anybody still stuck on labeling Okemo a tame experience probably hasn’t tried Quantum Leap. The black diamond trail, located on the Jackson Gore side of the Vail-owned resort, gets soft and loose when it warms up, making it perfect for a spring dash down the hill.

This season, a new six-person lift has replaced the Quantum Four, increasing uphill capacity to nearly 3,000 riders per hour. That’s a lot more opportunities to give your legs the ultimate workout.

Kitzbuehel always will have a place in my heart when it comes to spring skiing. My sons were 9 and 6 when I took them to Jay Peak for their first true spring skiing experience, the sort where the skiable terrain was fighting the good fight but ultimately was about to lose out. That morning, with the temperature already in the 50s, Kitzbuehel was a smorgasbord of corn and cream cheese, the sort of heavy snow that takes some getting used to. If they didn’t like this terrain, available at one of only a few open trails, it was going to be a very short day at the mountain.

Spoiler: They loved it.

The advanced-rated Kitzbuehel is a nod to the famous Austrian resort in name. It is steep and narrow with a few islands of trees to navigate along the way. It’s a classic New England trail, made only the better when the sun gets warmer, creating the sort of bumps that even your kids will love.

Let’s face it, we’ve all been humbled, heck, humiliated at one point or another in our lives when it came to skiing Sugarbush’s signature expert run. Stein’s, of course, named after the famed Norwegian Olympian who, at one point, had been Sugarbush’s ski school director, is a classically steep mogul trail that often ranks high when the discussion shifts to the East’s most challenging ski trails. Depending on the day, the bumps on the Lincoln Peak favorite can be unforgiving, which is why, with spring comes a bit more of an even playing field.

Duck into the adjacent woods on either side of the double black diamond trail in order to avoid the cat-calling that might come from the adjacent Valley House Quad chairlift. Or, just to grab your breath. You’re going to need to.

There have been a lot of valid complaints this season about how poorly Vail Resorts has managed Pinkham Notch’s Wildcat Mountain this season. But trails like Lift Lion might also justify the fact that Wildcat is set apart from the cookie-cutter experience its owner wants to deliver.

Lift Lion is a gnarly dash down the face of Wildcat Mountain that can come with a springtime mix of moguls, rocks, twigs and the like. Ski the black diamond trail down to Starr Line or Black Cat, or give your legs a break with a detour to intermediate Lynx.

Wildcat used to be mentioned in the same breath as Killington and Sugarloaf when it came to pushing the season into May. Last year, Vail closed the mountain on April 11. In 2018, two years before Vail took over, it closed on May 2. “I looked with awe at the ground I trod on, to see what the Powers had made there, the form and fashion and material of…
Read More