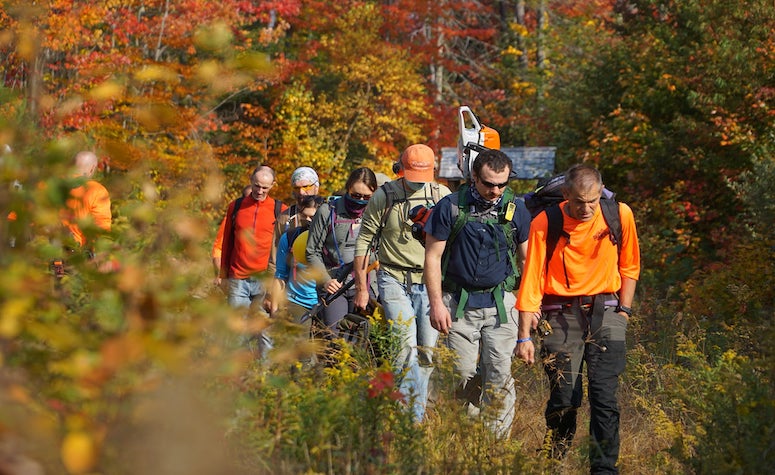 New England’s fall foliage gets all the autumn headlines. But for a certain segment of skiers in the region, September also marks the beginning of #GIMBY season.

That’s at least how Granite Backcountry Alliance has dubbed this fall’s mission of developing new, skiable terrain in New Hampshire and western Maine. Its “Project #GIMBY Glade Tour” presents an opportunity for backcountry skiers and riders to engage with the land and help create a network of a dozen new glades.

GIMBY stands for “Glades in my Backyard,” according to GBA founder Tyler Ray. “Because everyone should be so blessed to have a glade in their backyard,” he said.

“We have an endless pull of future users coming from an alpine skiing environment where they want to try something a little different. We try to meet the demand and, at the same time, be ecologically sensitive and balanced in our management approach.”

This year’s Glade Tour is scheduled to take place at five different locations over the next month (Intervale, Pike, and Littleton, N.H., Andover, Maine, and a spot to be determined), inviting those interested in lending a hand.

“This is an opportunity to work with like-minded people,” Ray said. “If you have an issue of finding ski partners and other people to get outside with, this is a great time to network and meet new people.”

Since its inception, GBA has sought to provide “low-impact, human-powered backcountry skiing opportunities to the public through the creation, improvement, and maintenance of ski glades.” That means investment in land conservation and access, safety and education, and partnerships and collaboration. Similar organizations look to accomplish the same goals in Western Mass. (the Western Mass. Backcountry Alliance has a trail work event scheduled for Sept. 18 in the Pittsfield State Forest) and Vermont (Ridgeline Outdoor Collective, which changed its name from RASTA earlier this year).

Seeking to improve the playing field for backcountry skiers, GBA embraces the opportunity to create glades on sites authorized by land owners in order to responsibly create terrain. It is a different undertaking than the haphazard expeditions that may have occurred 10-15 years ago.

“Part of the mission that we’re tackling is overcoming that challenge and working with land owners to do things the right way and develop skiable terrain that’s publicly accessible to community members,” Ray said. “That’s been an incredible shift in the backcountry landscape. Prior to Granite Backcountry and several other organizations, the backcountry skiing community never mobilized. And so they didn’t have the opportunity to work with landowners because, partly that was a different time, and backcountry skiing was seen as a much more niche sport.

“Now, with a collective voice, things happened and opportunities opened. That’s what we’ve been able to tap into is that idea of working with landowners and doing things in a more coordinated fashion.”

GBA members are more of a specific skier profile, one interested in a blank canvas of fresh powder that might not be always available at a resort. “Over the last five years, it has shifted into a more experiential activity where people are looking beyond the borders of the ski resorts,” Ray said. “Instead of skiing the same run over and over, this provides an opportunity to not only gain some fitness, but to have some adventure and to experience that with people that they trust and like. It’s been an expansion of the mindset on the East Coast here where we actually can ski in the woods when the land is managed properly. That’s become a very exciting prospect for many and driven a surge in backcountry skiing. People want to get outside, they want to go on an adventure, and that is part of the experience.”

GBA members do scouting year-round, while, in other respects, the organization might have land managers coming to them asking if they can partner up. “Land trusts are tackling their aging problem and overcoming the issues of straight conservation and trying to tap into a younger user base with the recreation,” Ray said. “Although our membership spans all ages, we have a youthful percentage that is enthusiastic and the next wave of conservation and recreation.”

Those interested in participating in this year’s Glade Tour can sign up at granitebackcountryalliance.org/glade-tour-signup. Prepare for the day as if going for a hike in the woods. Layer up, dress appropriately, and bring food and water. GBA will provide tools, helmets, and other safety PPE for people who don’t have it. You’re also welcome bring own, non-motorized tooling. There will be a team of certified sawyers who will be able to cut some of the bigger stuff and speed up the process.

“It’s a great thing to be a part of and ski what you’ve cut,” Ray said. In a recent survey, New Hampshire’s White Mountains were selected by USA Today readers to be the best destination for fall foliage.  A panel of…
Read More There will likely be no 2022 Olympic Games for U.S. Ski Team member Alice Merryweather.  The Hingham native and Dartmouth College student suffered a broken…
Read More

Boston’s annual ski expo is, once again, a no-go. Snowsports Industries of America, which was to launch an inaugural pair of consumer trade shows in…
Read More